When Will Spring Come? 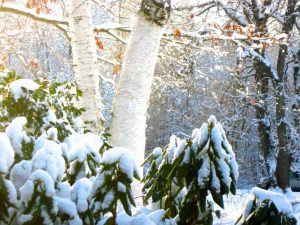 I’ve heard a lot of moaning and groaning about winter and have eagerly joined in. But when March 1 popped up, I stopped complaining. Why? Nothing’s changed outdoors. Still the vast cover of tired snow, and it’s snowing now, even as I type.
But something has changed. I feel the earth beneath all that snow begin to twist and contort, to breathe, to heave itself toward greenness. And I don’t want to miss a single pixel of that stirring. Already I saw  bulbs pushing up in front of the church. That was pure error on their part, though. They figured they had to grope their way through four feet of piled-up snow to reach the light, and when that snow was suddenly and inexplicably removed, they stood shivering in their nakedness.
I heard a cardinal sing the other day, along with the call of a pileated woodpecker, but I totally discount the mobs of robins that showed up a month ago. Thick on patches of bare ground as though it were April, and high time to get on with the business of mating. No, that was an aberration—not real spring.
I want to see the first blade of grass, the first snowdrops and crocuses, the first spring song of a chickadee. But right now, before all that, I have entered the season of Anticipation—my favorite time of the year. Not yet . . . but soon.
Just turned 80 last month. There may still be a lot of winter for me to endure, but the Real Spring of God’s everlasting Kingdom is just around the corner. No matter how bad things may get, I glory in this season of Anticipation and don’t want to miss any of the early signs.