The Power of Prayer

DURING WORLD WAR 2, when Britain had her back to the wall, a group of men led by Rees Howells, founder of the Bible College of Wales, took on the challenge of interceding for countries and nations in the current world crisis. I believe that God listened and heard and saved the world from the evils of Nazism through the power of prayer. I have paraphrased some of his commentary. The link to his book for the original:
http://www.inspirationalchristians.org/biography/rees-howells/    especially Chapters 34 – 36. He writes:

In the shadow of Dunkirk, acknowledged by our leaders to be an intervention from God, how thankful we are that God had this company of hidden intercessors, whose lives were on the altar day after day, standing in the gap

for the deliverance of Britain.
Mr. Churchill, in his War Memoirs, notes September 15, 1940, as “the culminating date” in the Battle of the Air. From his War Room, he watched as enemy squadrons poured over, with our planes engaging and getting shot down. Looking grave, Churchill asked the Air Marshal, “What other reserves have we?” “There are none,” the Marshall answered. Five minutes passed, and then the action ended. There seemed no reason why the Luftwaffe should have turned for home, just when victory was in their grasp. But we know why.

According to Mr. Howells, the constant bombing of Britain stopped after his group began to pray that Hitler’s attention would turn in a new direction. Two months later Hitler began attacking Yugoslavia, Greece, and North Africa, and the immediate homeland crisis was over. Then Hitler attacked Russia—against his commanders’ advice.
Howells felt moved to pray against Hitler’s attack on Stalingrad, thought to be the largest and bloodiest battle in the history of warfare, running from August, 1942 to February ’43.

This prayer for Stalingrad seemed the hardest of all to grasp. For a whole fortnight we wrestled, the Spirit insisting that we were responsible to see it through to a successful issue.
In spite of our cries, the enemy continued to advance until half of the city was in his hands. The fighting from house to house was some of the most desperate in the whole war; but the conflict in the Spirit was correspondingly desperate. Contrary to all human reason, as the news got darker, faith rose higher, until we found the enemy giving way before us. The tide turned in the visible battle and, to the wonder of the world, the Nazi army was driven from Stalingrad, utterly broken and demoralized. It was another mighty triumph of the Holy Spirit. 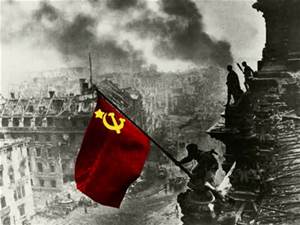 That Soviet flag means something totally different to us today, but on that day, it meant that Hitler had been defeated.

This gallant prayer effort puts a whole new perspective on the movie, as well as the general perspective of a spiritual War Room.

Do you have a prayer War Room? What battles might you win?