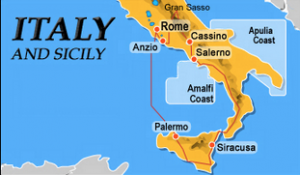 In the invasion of Italy, the danger spot was Salerno, where British troops landed in September, 1943. The Germans made a stubborn resistance and almost won the battle. “The day of the landing at Salerno and its sequel will always stand out in my memory,” said an Intercessor. He goes on:

The Director’s voice trembled and was scarcely audible. “The Lord has burdened me about Salerno. Our men are in great difficulties, and the Lord has

told me that unless we can pray through, they are in danger of losing their hold.” The awe of God settled on us, and before long we were on our knees, crying to God for Him to intervene. Then the Spirit took hold of us and suddenly broke through our prayers, and we found ourselves praising and rejoicing. We rose from our knees and began to sing praises, believing that God had wrought some miraculous intervention in Italy. The victory was so outstanding that I looked at the clock. It was on the stroke of 11 p.m.
On the midnight news, the announcer spoke gravely that unless a miracle happened, our troops would lose the beachhead before morning. Next morning, the news was more hopeful, but we eagerly awaited newspaper reports. Under the headline, The Miracle of Salerno, a front-line reporter had posted, “The enemy artillery was advancing rapidly with ceaseless firing. The noise was terrible, and it was obvious that unless a miracle happened, our troops could never hold the advance long enough to establish the beachhead. Suddenly, for no accountable reason, the firing ceased, and the Nazi artillery stopped its advance. A deathly stillness settled on the scene. We waited in breathless anticipation, but nothing happened. I looked at my watch—it was eleven o’clock.”

June 6, 1944, D-Day, the largest seaborne invasion in history, called forth another great prayer effort, with a million troops, 4,000 ships and 11,000 planes at risk. The Intercessors prayed, “O Lord, protect and keep our men! Don’t allow us to pray any differently from what we would if we were on the front line. We do believe the end of this will be victory.”
That was the only night German U-boats did not patrol the channel. The tide turned dramatically, and within a year, the European war was over. 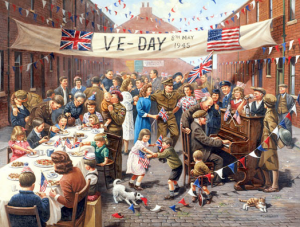 CAN ANYONE DOUBT THE POWER OF PRAYER?

How much effort do you put into prayer?
Please join that small band of faithful Intercessors.