Putting up weekly pills isn’t fun, so I listen with earphones to assorted conversations. One featured a Jewish host and a California Baptist pastor who refused to shut down his church during early COVID restrictions. Big trouble ensued, but he and his wife assessed the consequences and decided to stand and fight, all flags flying.

The conversation, though, grabbed me with the ensuing discussion of Morality and Character. Morality, they said, recognizes wrong. Character speaks against it—out loud. Their prime example was Hitler’s attempt to annihilate Jews. Most citizens saw the evil in this but did nothing. A number of Christians, however, saved thousands of adults and children, with many paying the ultimate price. (See below) 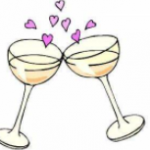 That got me thinking. I have a strong sense of morality, sometimes bordering on ridiculous. I will not drink a toast at weddings—not for biblical reasons (Jesus at Cana and all), but for the terrible effect alcohol has had on individual lives and families.

Character in my life, though, has been shadowy, at best. I want to get along, be peaceable. I think this started at my 13th birthday party. The boys in the group wanted to play Spin the Bottle, a kissing game with the lights out. Badly wanting group acceptance, I begged my mother for permission, though this wasn’t a game I wanted to play. Being accepted, though, trumped Morality AND Character. Fortunately (or by God’s grace), I sat in the dark with a boy who was no more interested in kissing than I was.

No one ever taught me the power of NO or how to say it forcefully. Over the years, situations came along that I knew were bad, but I lacked the starch to say so out loud. God protected me from serious trouble, but looking back, I see how tattered my character really is. I’m heavy into loving people but not so strong on bravery.

Our country is becoming less and less safe for both Christians and Jews. We haven’t yet been thrown to the lions, but what will we do if and when that day comes? Will we stand against it or run and hide?

What will I do in that day? 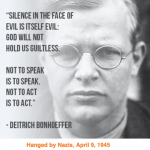 How is your character? Is there a story in your background? Please comment below, or email egus@me.com