It is the dead of night. The old farm lies fast asleep, and everyone

inside the house is sleeping, too. Everyone is sleeping. All but one…
On small, silent feet the Tomten moves about in the moonlight. He peeps into cowshed and stable, storehouse and toolshed. He goes between the buildings making tracks in the snow.
The Tomten is awake. He is an old, old tomten who has seen the snow of many hundreds of winters. No one knows when he came to the farm. No one has ever seen him, but they know he is there.
The Tomten goes first to the cowshed. The cows are dreaming that summer is here, and they are grazing in the fields. The Tomten talks to them in tomten language, a silent little language the cows can understand. 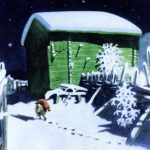 Winters come and winters go,
Summers come and summers go,
Soon you can graze in the fields.
The sheep and lambs are sleeping soundly. But they bleat softly when the Tomten peeps in at the door. He talks to them in tomten language, a silent little language the sheep can understand.

All my sheep, all my lambs,
The night is cold, but your wool is warm,
And you have aspen leaves to eat.

The house where the people live is silent. They are sleeping through the winter night without knowing that the Tomten is there.
Winters come and winters go,
I have seen people large and small
But never have they seen me.
He tiptoes to the children’s cot and stands looking for a long time.”If they would only wake up, then I could talk to them in tomten language, a silent little language children can understand. But children sleep at night.
Winter is long and dark and cold, and sometimes the Tomten dreams of summer.
Winters come and winters go,
Summers come and summers go,
Soon the swallows will be here, thinks the Tomten.
Winters come and summers go; year follows year. But as long as people live at the old farm in the forest, every night the Tomten will trip around between the houses on his small, silent feet.
(Adapted by Astrid Lindgren from a poem by Viktor Rydberg)