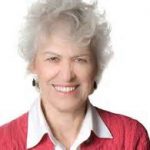 Suppose you were that young girl living in Liverpool, England, on coastal waters that could easily hide Nazi submarines. Life for Jill Briscoe’s family during the early 1940s revolved around listening to non-stop radio and dreading the sound of church bells that would signal invasion and the time to run.
Then came news that the British advance to aid the French and Belgians against the Nazis had turned into a rout. 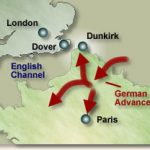 The Germans had pushed 400,000 allied troops back to the town of Dunkirk on the French coast. Further escape was impossible, with sunken boats making the harbor useless. Disaster stared Britain in the face. Politicians back home began discussing conditional surrender.
In an act of desperation, Prime Minister Winston Churchill called for a national day of prayer. All over Britain church bells sounded, calling citizens to plead with God to save those stranded men, as well as Britain herself.
Jill’s family were not church attenders, but they decided this just might be the time to go. They found the church packed, however, so did their praying among hundreds kneeling in the street. 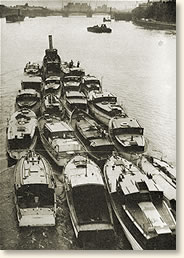 Small boats being towed down the Thames to Dunkirk. These were used to ferry troops from the beach to larger ships offshore.

Inexplicably, Hitler stopped his forces from advancing, and historians to this day have no idea why. This respite lasted three days—just long enough for the Miracle at Dunkirk to happen. The call went out in Britain for small vessels to come to the rescue. Over 800 fishing, pleasure, and tug boats responded, sailing the English Channel on unusually calm waters to rescue more than 338,000 soldiers.

It was the queerest, most nondescript flotilla that ever was, and it was manned by every kind of Englishman, never more than two men, often only one, to each small boat. There were bankers and dentists, taxi drivers and yachtsmen, longshoremen, boys, engineers, fishermen and civil servants. . .  ~Arthur D. Divine

It was after this event that Churchill gave his stirring speech about fighting on the seas and oceans, in the air, on the beaches, in fields and streets, in the hills. “We shall never surrender!”

Dunkirk may have been first of many divine interventions during the war, and some believe that prayer, as much as heroic effort, saved England. One small group, calling themselves Intercessors, entered their War Room and interacted powerfully with the Lord. More on this remarkable group next time.
One of my favorite short stories is The Snow Goose by Paul Gallico, climaxing in the dramatic removal of troops from Dunkirk. If you have read it, please let me know. If not—get yourself to the library ASAP. A beautiful, heart-wrenching tale.