Are you up for a trip to Mars? Apparently, there’s quite a queue—even with a $500,000 price tag. The US and Russians have been exploring the possibilities since 1960, and now they’re sketching out what an actual colony might look like. 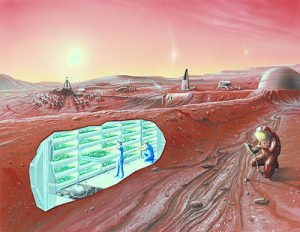 Hope you like living in a bubble and wearing a spacesuit.  Though adults would migrate first, kids are bound to happen. Could moms ever say, “Go on outside and play in the red dust”? And food. (See the agriculture pic.) Meat? Cheese? Eggs? Not likely. Probably not even rice, given the water 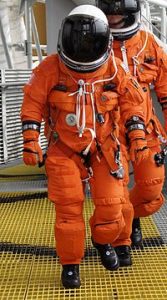 problem.
The big challenge is getting there. Takes the better part of a year, with bones, brains, and eyes  deteriorating in weightlessness. And BOREDOM in that relatively small prison cell.
What’s the point of all this hassle? An adventure, yes, but Real Believers are convinced that Earth mortals will self-destruct and make the planet uninhabitable. They see themselves as saviors of the human race—seeds planted on this alternate planet that will eventually blossom into a self-sustaining colony.
The Tower of Babel comes to mind—an apt object lesson here. After Noah gave the human race a second 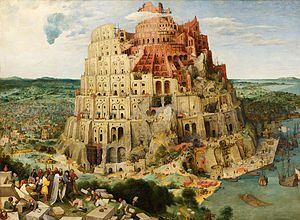 chance, they proceeded to challenge God Himself by building a great monument to their own cleverness. God laughed at their pride, and the “colony” fractured into multiple language groups.
Now Mars folk want to take matters into their own hands, establish a new colony, and show God a thing or two. HOWEVER, those inhabiting this colony would be direct descendants of Adam and Eve, subject to the same sin disease that infests earthlings—a soul sickness that produces boils of anger, greed, and lust for power. The only possible cure was offered years ago through the love and sacrifice of our Savior, Jesus Christ.
Yes, Earth will be destroyed; the Bible tells us so. But Mars is a shabby alternative to heaven and the great feast that will be spread before those who are willing to bow before the Lord of the Universe. 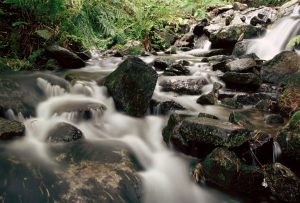 The Water of Life

Think of the mission possibilities, though. How many Christians would sign up for that long journey—just to carry the water of life?

Have you ever wanted to travel to far-distant places? Sci Fi takes us vicariously wherever we’d like. What are your favorite destinations—either on Earth or elsewhere? Comment or email me—egus@me.com