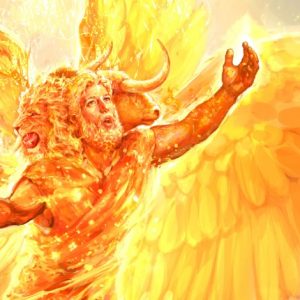 You’re 30 years old, unemployed and sitting by a river, when four job interviewers arrive on a fierce wind. Each has four faces—human, lion, ox, eagle—and 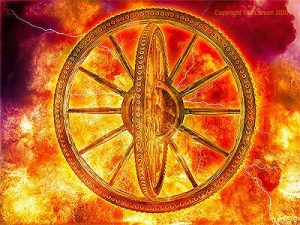 wings that touch each other. And wheels! Big ones that intersect and move sideways, as well as up and down. The eyes on those wheel rims are alive, and their wing noise might drown out a SuperBowl crowd. But these beings don’t spell out the job description. No, the Big Boss Himself appears, glowing like molten metal.

At which point, you stop breathing and fall on your face.

The CEO speaks. “Stand up! I’ve got a job for you! First, though, a bit of lunch. Eat this scroll of lament and woe. The words look sour, but you’ll find it sweet enough.”

You do eat the scroll. The whole thing. And yes—sweet as honey.

” Good,” He says. Now go to the Israelite exiles. Tell them they’re a bunch of pig-headed rebels. You’re my watchman, Ezekiel! You must WARN of judgment on all Israel.”

With that, the noisy wings and wheels carry off the entire vision.

Was this Ezekiel’s Near-Death Experience, or was it something else? He wasn’t getting glimpses of heaven; he was right there at the Throne, in company with those living beings with their eyes and wings and faces—beings who worship Adonai continually. (See Revelation 4:6ff) Far more is going on in the Real World than we can ever imagine!

The Bible book of Ezekiel is a challenge to read, and seatbelts are recommended. The first half focuses on God’s warnings of judgment—which we face today—but the book closes with a great vision of eternal HOPE.

We live in troubling times, but there’s even greater conflict going on in the heavenlies, HOWEVER, we’ve read the whole story and know who wins in the end!

Oy vey! May the Lord of glory be praised!

“Thy will be done on on earth AS IT IS IN HEAVEN.”

Speaking of earth, Election Day is upon us. Regardless of your political persuasion, please pray that God will accomplish His purposes—which could include judgment, whatever party wins the election.