Did you ever watch the movie Fantasia, either in the 1940s or the rerun in 2000? One of the segments that Disney set to classical music was, “The Sorcerer’s Apprentice,” starring Mickey Mouse as the beleaguered magician’s helper. Here’s the story, based on a poem by Goethe (1797):
An old sorcerer heads home, leaving his apprentice with the chore of cleaning the workshop. Tired of fetching pails of water, the apprentice, using a stray bit of magic he’s picked up from his boss, enchants a broom to haul it for him. The broom does its job, to Mickey’s delight, but doesn’t know the word STOP, and the water level rises alarmingly. The apprentice feels doomed, but when all seems lost, the sorcerer returns, breaks the spell and saves the day.
ELLIE is the name of the apprentice living at my house these days, but it’s a pear tree, not a broom, that won’t quit. (Actually, I could use a quitless broom!) This pear tree has been lazy in recent years, coming up with  few of those marvelous Seckel pears that are worth a king’s ransom. This year the tree was loaded, and I could hardly wait for harvest time. I guarded it jealously, driving off crows and woodchucks. 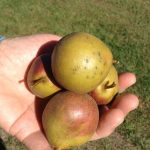 BUT—”thick and fast they came at last, and more and more and more.” We’ve collected a bushel of those sweet, golf-ball-sized pears, with MORE still on the tree. Being so small, they take forever to cut and cook for the freezer, so at this point I’m allowing ALL fruit predators free access—and that includes you! 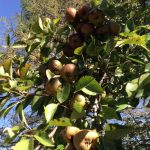 The Goethe poem has a built-in moral: “Powerful spirits should only be called up by the master himself.” Good advice for dim-witted apprentices, but MY Master doesn’t do magic and has in fact spoken strong words against it.
But his hand created some mighty fine pears that come in small, delicious packages. Stop by and try one . . . or a couple dozen.