"He Descended into Hell"

This phrase is taken from the early, traditional version of the Apostles’ Creed that says, “He was crucified, dead, and buried. He descended into hell. And on the third day he rose again from the dead”. Most church groups no longer say it that way, but it gives a clear picture of just what Christ endured on our behalf. 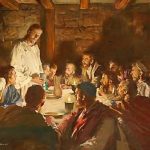 It started in the Upper Room, almost as he stepped through the door. There, an overwhelming dread and sorrow settled upon him. “I’ve longed to eat this Passover with you before I suffer,” he said, face and voice full of pain.
Such a difficult meal—Judas dipping into the same bowl; Peter—cocky, clay footed; the lot of them scrapping over who would be first in the Kingdom. But with infinite patience, he washed their feet and sent Judas off on his fateful errand. Then he broke his heart and wrung out blood for them to drink.
The long walk to the Mount of Olives tried him even more. By the time they reached the olive press and adjacent grove, the pangs of death had taken hold of him. His eyes pleaded for understanding. “Please—pray with me for just an hour. Please.”
But when the vision came, they were asleep. No one stood by to ease the horror, to wipe blood oozing from his pores.
The indefinable dread that had stalked him all evening now hovered in his peripheral vision, a presence from which he wanted desperately to run or to escape by squeezing his eyes tight. But then it came—a door opening, slowly, inexorably, exposing the bowels of earth beyond soil and rock and inner fire. In rigid fascination he beheld the fullness of the Fall, the ripeness of evil, almost like a painting or grotesque tapestry of suffering—every thread crafted by human hands from the twisted fabric of rebellion against the great I AM. It lay exposed before him: instruments of torture on tables of blood, vomit, and tears.
From the seething depths of that open door he felt rather than heard a scream. Muffled at the start, it gathered first one voice, then another and another, rising through layers and eons of pain to beat at him in appalling intensity. He fell writhing to his knees, hands clutching his head against this unbearable weight of anguish. Compared to such crushing evil, execution on a cross would be a mere unpleasantness. His fingers clawed at the gnarled roots of a 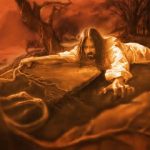 tree as though to counteract the howls with some lesser pain. He had come to this place, this moment, as the appointed interface between heaven and hell. How could frail flesh confront such a task? “Father, Father, if it be possible . . .”
He lurched to his feet and circled the stone olive press, drawing cool night air into his lungs. He looked to the trio huddled at the base of a tree, these men who for three years had walked and slept and eaten with him. He saw in them the faces of countless others who too were trapped in their humanity. He alone in his humanity could deal with that dreadful, gaping door on behalf of these millions. He straightened and traced a line of torches winding up the hill.
“Come—Peter, John. It’s time.”
He bore the next hours with almost a sense of relief. He could remain passive; he had only to endure, not to war. Not until the cross thunked into place did the howls assail him once again.
He could still back out, he knew. He sensed rather than saw the legions that surrounded him, blocking the sun, ready at a word to evaporate the nails, heal the wounds, succor his spirit, lay the mob in the dust.
Again that dreadful door appeared, this time at a distance, and he himself had to approach it, step by agonizing step. No one forced him; indeed, part of the agony lay in the free necessity of it all. It wracked his body, made him strain against the nails, cry out in anguish at the aloneness of that tortured path. But with the image of those slumbering disciples engraved on his mind, love propelled him toward the abyss.
And then he was on the threshold. His shriek, reverberating through the heart of history, froze time and spectators for an eternal instant.
With a final, tortured breath, he gave up the ghost and stepped through the door. 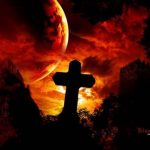