"He Descended into Hell"

This is a two-part depiction of Jesus’ real suffering. Click the link at the end to finish the story.

A phrase, taken from the early, traditional version of the Apostles’ Creed, says, “He was crucified, dead, and buried. He descended into hell. And on the third day he rose again from the dead.” Our church no longer says it that way, but it gives a clear picture of what Christ endured on our behalf.

You might say it started in the Upper Room. As he stepped through the door, an overwhelming dread and sorrow settled upon

him. “I’ve longed to eat this Passover with you,” he said, voice full of pain.
Such a difficult meal: Judas primed for betrayal; Peter—cocky, clay footed; the lot of them scrapping over who’d be first in the Kingdom. Should he drive them all into the night? Instead, with infinite patience, he washed their feet and sent Judas on his fateful errand. Then he broke his heart and wrung out blood for them to drink. 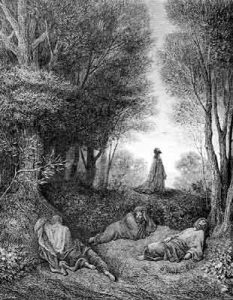 The long walk to the Mount of Olives tried him even more, with the disciples still carping over his words at the table. By the time they reached the olive press, the pangs of death had taken hold of him. His eyes pleaded. “Please—pray with me. Stay awake. An hour. That’s all I ask. Please.”
But when the vision came, they were far gone. No one stood by to ease the horror; no one wiped the blood oozing from his pores.
Night sounds hummed through the olive trees: a restless bird chittering, insects making music, the far-off bleat of a sheep, men snoring off their meal. But deep in the garden, groans as of a woman in labor overrode that velvet tranquility.
The indefinable dread that had stalked him all evening now hovered in his peripheral vision, a presence from which he wanted desperately to run. Instead, he watched and waited, drawing an arm across his dripping face.
Then it came—a door opening slowly, inexorably, exposing the bowels of earth beyond soil and rock and inner fire. In rigid fascination he beheld the fullness of the Fall, the ripeness of evil, like a painting or grotesque tapestry of suffering. . .
.https://www.eleanorgustafson.com/descended-cont/