I’d like you to meet daughter Rachel Brynne. She too is a special gift and is who she is because of a previous miscarriage. That child I have yet to meet, but I got Rachel from an unanticipated egg and sperm combo. She has brought much blessing to me.
Rachel was birthed in Hollywood, California, thanks to a Christian obstetrician who offered free delivery to seminary students. That meant having to negotiate the 8-lane, Los Angeles Freeway for checkups—a thought that now gives me the vapors. AND—no two-weeks-late business for that doctor! You come in on Friday; you have a baby that night. He also insisted on spinals—which left me with a horrendous, two-week headache requiring codeine. My daughter the druggie… Free delivery, though. 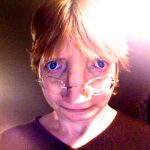 Rachel at her best

Rachel, sandwiched as she was between two boys, learned survival techniques. Her older brother especially tormented her endlessly. One day, her parents came home just as Rachel was attacking Eric with an umbrella. And who was it that got into trouble?
Rachel doesn’t have a string of degrees after her name, she having chosen the path of learning, rather than just achieving. Learn she did, becoming a person rich in friend skills, in love for the Lord, in marrying a fellow Wheaton student and bearing her own three children. She loves to cook, to provide a feast at Christmas and Easter and for whatever else needs celebrating. For her, feasting is a form of worship in the biblical sense, and we are always honored to be at her table.
She also does dogs—big ones. Briscoe and Bahari are Rhodesian Ridgebacks, each probably weighing more than I do. 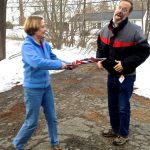 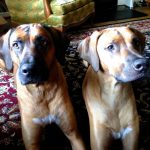 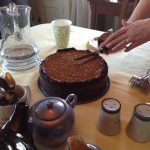 Food for all Seasons 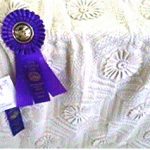 Rachel crocheted a bedspread that won Best of Show at a local fair. Took her 30 years and roughly 1600 hours to complete. A long commitment to a demanding project. Brings to mind other long, arduous tasks—raising kids, staying married, serving God in the trenches of whatever occupation. Hard stuff, and the haul can seem long and lonely. But I commend my favorite daughter: “Well done, good and faithful child!